The historic fabric of the City of Madera relates to the development of resources from the nearby Sierras. With that in mind, Judge Wyatt, the assistant presiding judge of the Madera Superior Court, asked that this same metaphor be used in the New Courthouse design. Specifically, the Judge requested the use of granite from the nearby Raymond Quarry, wood from the Sierra National Forest, and glass to represent the spectacular waterfalls and winter ice formations in the area.

The Madera Courthouse is composed of four stone modules with a central atrium or “Glacier.” The stone modules are designed with Sierra White granite in a pattern that gives reference to the natural striations seen at Half Dome in the Yosemite Valley. Ice and water influence the design of the central atrium which is organized in a series of geometric angles and forms with a skin of ultra-clear glass. The transparency of this “Glacier” reveals the warmth of the wood wrapped walls in the lobby. “Madera” in Spanish means “lumber” or “wood.” Wood is used responsibly and detailed beautifully in the interior spaces to transition from the monumental scale of the Courthouse to the intimate scale of the individual.

The Madera Courthouse design demonstrates the transparency and dignity of democracy and provides a place to facilitate the workings of the American ideals of justice.  It is a place of permanence and resolution. The Courthouse was positioned on the site to work with the existing Historic Courthouse and Courthouse Park to create a ‘town square’. Oriented toward true north, the monumental public façade reveals itself toward the Park and the greater Downtown area. The transparency in the design of the north-facing elevation welcomes the public and provides a visual connectivity from the outside to the inside. There is a procession and hierarchy in the design of the public flow transitioning from the informal to the formal experience.

The four-story, steel-framed structure is designed to balance public access, judicial process and in-custody handling with security and privacy. There are ten courtrooms and ten judicial chambers with clerical support; administration, jury services; traffic, civil, family, juvenile and criminal divisions; prisoner holding and limited subterranean parking for judges and key courts personnel; as well as in-custody vehicle accommodations for the County Sheriff and California Department of Corrections.  The design conveys the image of a courthouse, while reflecting the dignity of the public in an approachable way.

The order and clarity of the design is reflected in the program stacking of the courthouse is based on a traditional “bar scheme” with a central atrium for easy wayfinding. The courthouse has also been designed for future flexibility. For example, the site’s northwest corner has been reserved for a future building expansion and the current plan can accommodate future changes because it was designed in a modular fashion. 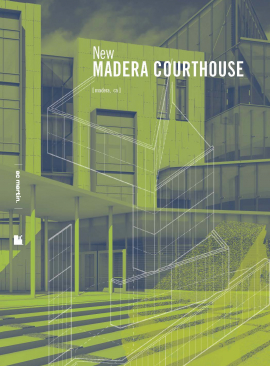